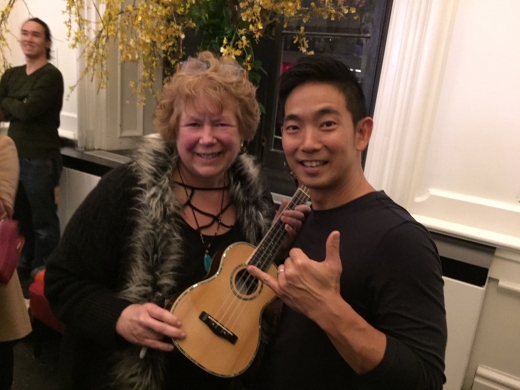 I brought my ukulele to Jake Shimabukuro’s concert. As I waited for the doors to open I played a tune. I saw a man’s eyes sparkle and asked if he played and he said, “Yes”. I offered my ukulele snd he accepted. He finger picked a classical tune. Everyone around us stopped, looked and listened. He told his story.

I made eye contact with a man carrying a uke in a case. I asked him if he played. He did, even though he had a bandage on one of his fingers.  It was wonderful. He told me his story.

Jake and musicians performed four string magic that transcended the audience at Joe's Pub to a beautiful place. He told his story.

I met Jake after the show and told him my story. He autographed my ukulele “Aloha, Jake”. I have an amazing new story.

What sparks story sharing in your day?